I was very sad to get the news last night that Chad Everett lost his battle with lung cancer at 75.  The timing was ironic for me since earlier in the day I had been remembering this time last summer when after an exhausting four days at Comic-Con, me and my family decided to take a trip to LA for a few days to unwind before heading back home.  How does that relate to Chad Everett?  Let me tell you the story.

We for the first time went to the Hollywood Walk of Fame.  We walked for miles through a cavalcade of Hollywood elite that spanned at least a century that my kids mostly had never heard of.  It ended up being a big history lesson for my kids as I explained who many these people were and what their contribution was to entertainment.  Fine, I took more interest in the TV stars, but my kids didn’t mind.  For the record, they at least recognized Michael Jackson, but that’s only because they first heard of him when he died a few years ago.  They recognized Ozzy Osbourne too for some strange reason.

It’s interesting, I didn’t take many pictures of the stars that day.  I guess there were so many, very few evoked a huge emotional response.  If anything, a few evoked some laughter over “What are they doing here?”  However, one did strike me, and I was so tickled to see it.  I took this photo with a big smile.  Then I told my kids his story.

You see, I watched a lot of TV in the late 70’s/early 80’s as a young kid.  Probably stuff that was a little over my head, but when you’re bored on a Saturday afternoon and the local channels are showing reruns of westerns and medical shows, you watch what’s available to you.  This was after all the days before cable and satellite TV.  I watched on those weekend reruns a show called “Medical Center” (in combo with “Emergency”).  Even a young kid couldn’t help but be enamored by Dr. Joe Gannon, played by Chad Everett.  He was so nice to look at and his character was smart, gutsy, and performed more miracles than Bones McCoy.  Or at least my ten year old self thought so.  His type of medicine seemed more real.

Just like many other actors, once his big role was gone, Everett was limited to several “Hey, it’s that guy!” sightings on other shows.  He did a few failed series, appeared in some miniseries’ back when people actually watched them, and you may not know this, but any TV actor from the 1970’s was obligated by contract to make an appearance on “The Love Boat.”  How else could they get all those big names to appear on such a cheesy show?  I also watched him with Jerry Lewis on the yearly muscular dystrophy telethons, remembering his big heart.

Just looking at Chad Everett’s imdb resume is a testament to what an amazing career he had.  I didn’t know he was on so many recognizable programs.  I think that’s what happens through the years, you take for granted what an amazing actor brings to the table, even a journeyman actor that was just happy to be finding work.  Everett owned a portion of “Medical Center” and that left him financially stable, but that didn’t stop him from continuing his craft.  Yes, he fell into the trap of alcoholism, something that plagues a lot in the business, but he managed to openly overcome and be an example and inspiration to others.

It wasn’t until Chad Everett turned up on my favorite show, “Supernatural,” in 2009 though that I remembered how much I loved this guy and how excited I was to see him on my TV again.  He got to play the eighty year old version of Dean Winchester and he again blew me away with his good looks and charm.  Even at the age of 72, he still had it.  It’s fascinating how much he studied up for his role too, for he had all of Dean’s mannerisms down pat.  Jensen Ackles (Dean) was certainly impressed.  “It’s always tough to play a role that is established by another actor but I think he (Everett) did a great job.”  Jim Beaver, who also worked with Everett on that episode, called him the “world’s hottest 72 year old man and the world’s oldest 16 year old.”  I have to admit, it’s one of my favorite episodes.  For other “Supernatural” fans, this was their first exposure to this fine actor, and he was welcome with open arms into this tight knit fandom family.

Chad Everett left behind loved ones to carry on his example and a indelible impression on us all.  We’re all better for knowing him, either in a big way or for just those that ever saw him once on TV and liked him.  Not bad for a young man in Michigan who decided to chase his dreams in Hollywood.  It’s a legacy to be proud of and will live on.

If there’s a network that has the least amount of buzz for its pilots so far, it’s FOX.  Maybe because there isn’t much room on…

Well, that was quite a day.  Talk about being screwed with your pants on.  Yes, ABC, NBC, and CBS finished their carnage decisions about the fates… 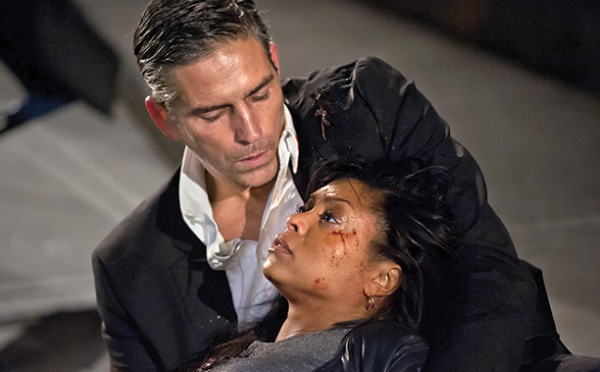 Person of Interest doesn’t make moves lightly.  While there is a lot of pain out in the fandom over the loss of our beloved Joss…