Though only two and a half months have passed since the bloody mid-season finale, watching the first few moments of The Walking Dead felt like running into an old friend.  For our main characters, however, everything at the prison just went down, and the group has scattered in various directions.  For this episode, we’re asked to sit back and take a closer look at the dynamics of Rick and Carl’s relationship, as well as delve into Michonne’s backstory.

In the opening scene, Michonne is wandering around the prison, witnessing the destruction in the aftermath of the showdown with The Governor.  In the process she acquires two new “pet” walkers, just like she did when her character was introduced in season two.  After a time she comes across The Governor’s body, then Hershel’s severed head.  Ok, we get it – Hershel, a symbol of hope and kindness in the midst of the bleakness, is really, really dead.  For a while it felt like the show was trying to drive the hopelessness a bit too far, but by the end of the episode, that all changed (more on that later).


It was tough to see Hershel in that state, now having turned, mouth chomping and growling.  I noticed Scott Wilson (and David Morrissey as well) received billing in this episode, so I thought we might be treated to a flashback of Hershel to lessen the pain of his demise, but alas, all we got was his head.

After leaving the prison, Michonne comes upon some tracks in the mud leading to a road, but we all know that at least for now, she has to go her own way.  It seems Michonne is at a crossroads – she can give into her feelings of despair or keep pushing forward.  And she has been faced with this reality before.  Through a startling, strange dream sequence, we get to see Michonne’s life before the Zombie apocalypse, complete with a home, a significant other, friends – and a beautiful little boy.  All in one moment, we see Michonne’s ideal life turn into a nightmare.  And though we don’t know exactly how it happens, Michonne loses everyone close to her.  So it seems she is again at this place after everything that happened at the prison.

Meanwhile, Rick and Carl are on their own, looking for a place to lay their weary heads for the night.  Rick is in bad shape, battered and weak, and Carl, from the get go, is brazenly defiant.  They reach a town and forage first through a country store (where lo and behold, there is food and supplies – strange how there are always essentials still on the shelves of these places) and then a house where they set up “camp” for the night.  They argue about everything, from saving bullets to securing the house (where Carl sticks in a jab that the knot he tied to reinforce the door would hold, considering he learned how to do it from none other than Shane).

In the morning when Carl wakens, he finds Rick basically unconscious, and proceeds to lure some walkers off the front porch and away from the house (and Rick).  Despite getting into a sticky situation (we know whenever a character falls they are in deep trouble), Carl kills the three walkers.  He goes back to the house, and with Rick still out, lets him have it.  He blames Rick for not protecting the group, not being proactive about The Governor, and especially for not keeping his own wife and daughter safe.  He tells Rick “You were their leader!  And now – you’re nothing.”  Then, just to twist the proverbial knife, he tells Rick he would be fine if Rick died.  Carl is full of rage, which of course is understandable.  Like Michonne, he has lost his family.  One has to wonder if Carl still would have said all those things if Rick had been awake.  Considering the trauma he just went through and the impulsivity of being a teenager, chances are he would have.

The two most compelling scenes (and biggest revelations for Michonne and Carl) come in the episode’s last few minutes.  First, we see Michonne moving through the woods, surrounded by walkers, yet undetected due to her pets.  The moment of truth is about to arrive.  Amidst these shambling, aimless walkers, Michonne must decide whether or not to give in to that crushing despair and just give up, or fight to see another day.  It’s when Michonne sees a walker that closely resembles herself and stares into the abyss of the walker’s face, that she slides her katana out of its sheath and hacks the heads off the whole herd (including her new pets).  Michonne has chosen her path.  And we know, even before the scene is shown, that she’s going back to track those muddy footprints.

Next, Carl – back in the house with Rick after another close call with a walker – is sitting at his father’s side when Rick starts to twitch and groan.  In the dark and due to his quickly mounting panic, Carl thinks Rick may be a walker, and he retreats to a corner, gun drawn and ready to fire.  Only this is his dad, and ultimately Carl is just a kid, and he can’t do it.  Laying down his gun and sobbing, he waits for “walker Rick” to bite him.  When Rick finally speaks, Carl’s relief and fear overwhelm him, and we see the young son reach out for his dad – all traces of cockiness gone – and confide how scared he truly is.  But it’s more than that.  When the two later share a bonding moment, it’s clear how much Carl still needs his dad.

As Michonne and Carl’s revelatory journeys end (at least for this episode), Michonne finds the house that Carl and Rick are held up in.  Her relieved sobs also provide a powerful moment, and as Rick spies her through the peephole of the door and tells Carl “It’s for you,’ the reconnection of these three gives rise to that ever elusive but sought after entity – hope.

The combination of the writing, directing, and Chandler Riggs and Danai Gurira’s acting made this a standout episode.  Carl’s sobbing at his father’s awakening was truly moving, as was Michonne’s words to the now dead Mike.  I may be wrong, but it seems like Mike may have killed himself and their son in despair, as Michonne states they could all still be here, that he wasn’t himself when he did “it” and alludes to the fact that he was wrong – because survival was possible.

Some of the episodes’ subtle scenes were also noteworthy because they were especially poignant.  Carl’s reaction to seeing a teenager’s room inside the house they were staying in, particularly when he saw what looked like an Xbox and video games, showcased the loss of innocence and childhood delight that kids growing up in the zombie apocalypse face.  Likewise, the juxtaposition of the charming depiction of a young teenage boy sitting on the roof of a country house, enjoying a (big) can of pudding, marred by the intrusion of a walker scrambling to get out of the window behind him was another beautifully poignant illustration of just how much kids have lost in this new world.

After the mid-season finale, I was bemoaning that the concept of hope went the way of Hershel’s head, and that the show might be telling us there’s just no hope for this group (or humanity).  Well, after this episode, maybe what the show is really telling us is that even when all hope seems lost, there is value in continuing to fight, and human connections (both familial and otherwise) are possible, despite the bleakest of landscapes.

I like that message much, much better.  In fact, it makes me hold out just a bit of hope that maybe, somewhere down the road, someone is going to walk up to Rick and Carl holding a squirming baby Judith in their arms. 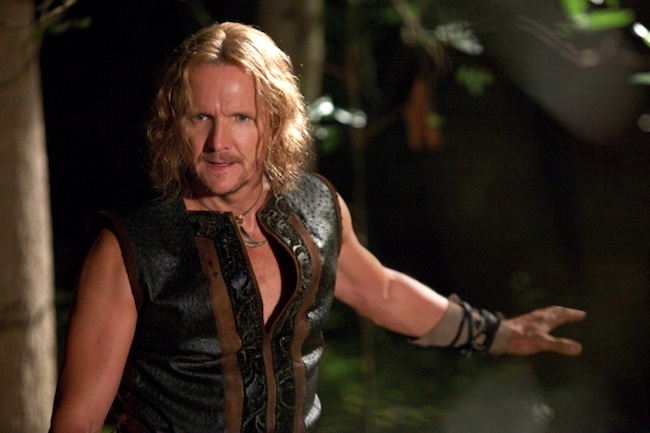 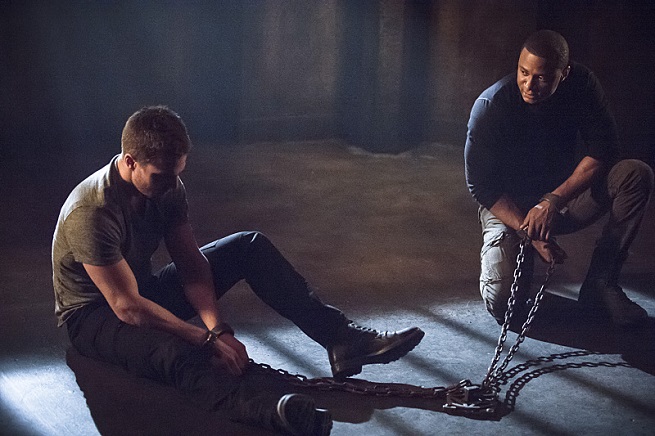 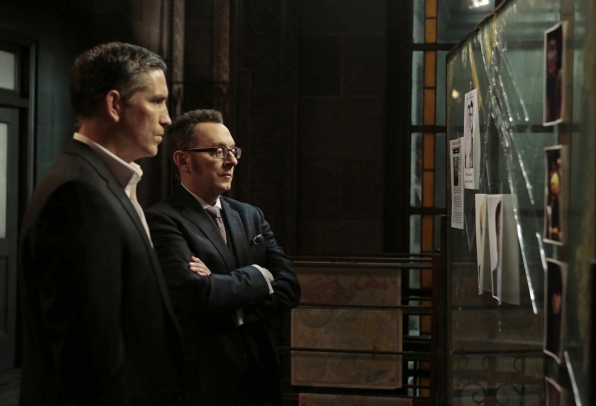 “All In” is the perfect example of how to allow the case of the week move the larger emotional storyline forward.  On the surface, this… 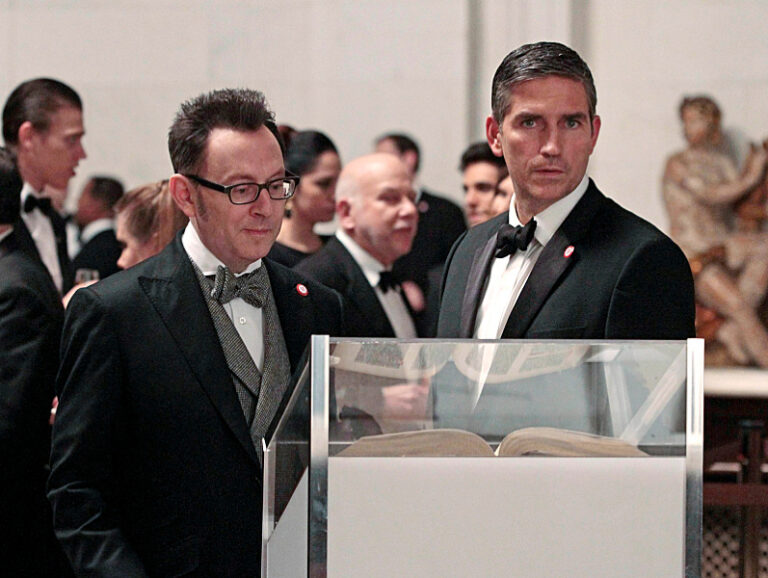 Appearances are everything, appearances can be deceiving, don’t judge something solely by its appearance:  all of these themes were in play in this week’s episode…