Now that’s how you do vampire and werewolf sex!

Okay, “The Birthday” offered way more character nuances than that, but as someone who has been rooting for Caroline and Tyler for a while now, that’s where my biggest thrill came from.  I even asked Julie Plec about it at Comic Con and she said that vampire on werewolf sex was “inevitable.”  I’m glad “inevitable” meant the season three premiere.


The major event to kick everything off, the awkward family birthday party.  Come on, admit it.  Don’t a few of you have our own stories to tell?  Someone always manages to make a jackass of themselves, getting drunk or stoned at those things.  In this case, Elena was hardly enjoying herself, even if both chaperones Alaric and Damon were pretending all that liquor those teenagers were drinking was colored water.  At least her guests were happy.

Despite all that, each character had their tale of woe, but that’s par for the course on this show.  Following along is a metaphoric bouncing ball, but that’s exactly why we’re sucked in like a Hoover every week.  We lurve bouncing balls.

Why not start with something bloody and violent?  This is a vampire show.  Or a werewolf show.  Or both.  Klaus, our werewolf/vampire hybrid, starts his carnage with two red shirts, I mean young women, in the quest of some werewolf who he spends the episode torturing for information about his werewolf friends.  Who’s supposed to handle the ladies after they fess up?  Enter Stefan the henchman, aka, the vampire on a bender.

After that, it’s time for a nice review of what the characters did over their summer.  Elena’s been trying to find Stefan, Jeremy is seeing things he knows he’s not supposed to see, Caroline is helping Elena, hanging out with Tyler and looking mighty perky and hot doing it, and Alaric’s months on the Gilbert couch are definitely not doing him any favors.  He’s a mess.  He is the one though that does actually manage to say Happy Birthday to Elena.  Also somewhere in there is Matt, who’s bonding with Jeremy since he’s the only one he can talk about his annoyance over the supernatural.  He and Caroline certainly aren’t talking!

Damon has been letting loose this summer and shows off his gorgeous…bathroom.  That is one heck of a foamy…tub.  He’s still hanging out with Andie, who still requires scarves as a fashion accessory.  How much blood can that woman produce?  She is actually in on the hunt for Stefan, which tells us at very least that Damon is putting some trust in her.  Could it be he actually likes her?

From there the story twists, and it does so in every perfect way we expect from this show.  Turns out Damon has really been hunting for Stefan without Elena’s knowledge and Alaric has been playing Robin to Damon’s Batman.  Or Watson to Holmes, or just insert your own hero and sidekick reference here.  Upon finding the carnage in Tennessee, Damon instantly knows it’s Stefan.  He has a signature.  The Ripper.  “He feds so hard he blacks out and rips them apart but then when he’s done, feels remorse.  It’s the damndest thing, puts the bodies back together.”  This revelation is interesting, for if anyone believes that Stefan has been a total dewy-eyed lovey dovey sap for 140 some years, your bubble has been burst.

Now here’s an interesting twist.  Tyler is now part of the circle and has exact knowledge of what’s going on.  Yes, the vampire killing werewolf.  The one this time last year no one trusted and loathed on many occasions.  Of all the people to remind the audience of events at the end of last season, it was quite strange coming from Tyler.  Quite cool too.  He’s already figured out Damon digs Elena, and speculates he may not want to find Stefan for that reason.  He even knows about the kiss!  “But you kissed him. Probably screwed with his head.”  Huh, go figure.  Tyler is the one that gets Damon the best.  Why in the world did Elena share that with Caroline?  With anyone?  Do brains not work until you turn 18?  I do love what a mortified Caroline told Tyler afterward.  “Just because I tell you things doesn’t mean you’re allowed to know them.”

It’s time for the party and poor, poor Damon, he’s got another very bad issue.  He’s so in love with Elena, probably more than before.  His tender “gift” of her necklace back, combined with his defensive “who cares” bravado still fails to mask that this is one really hurting dude.  Does Elena not see it, or is she choosing to ignore it?  I think the latter.  She has stronger feelings too but hides them out of loyalty to Stefan.  These poor saps.  The tension is so thick you need a freaking machete to make a dent.

On a couple of side notes about the party, I hate Jeremy’s new haircut.  Also, Matt is still sweet on Elena and frosty toward Caroline.  And Jeremy is doing drugs.  It’s the pilot all over again!  Oh, and my absolute favorite line of the episode actually comes from Matt.  “Aren’t you guys supposed to be mortal enemies.  Isn’t that how it works in the vampire/werewolf universe?”  Hee, Matt with balls. I love it.

Does Bing own The CW now?

Anyway, this show wouldn’t be what it is without the tragic death, and poor Andie’s number is up.  Stefan’s motive for killing Andie to send a message to Damon is interesting.  Was he trying to show Damon he was too far gone?  Just Stefan alone convincing Klaus he was the one to deal with Damon proves that Stefan still wants to protect his brother.  But I’m with Damon, killing Andie was pretty low.  It’s now Stefan instead of Damon that embraces the concept of collateral damage.

Also interesting is Damon’s defense that he’s trying to find Stefan because of Elena.  Is that a true statement?  Does he not mind Elena finding happiness with his brother?  Despite his feelings, he’d rather see them both happy together and watch along the sidelines?   This is such a major switch from the brotherly dynamic in season one, isn’t it?

Then it actually gets worse for Damon.  Elena figures out that he’s been tracking Stefan all along and hid it from her.  So Damon has to tell her the bitter truth.  All those deaths, all that carnage, it wasn’t Klaus.  It was Stefan.  He tells her that Stefan is too far gone and it’s time to let go.  He’s still raw from his showdown with Stefan and can’t be comforting about this anymore.  In other words, Elena’s timing sucked.  This is one of those times I want to smack Elena for being so short sighted when it comes to Damon.  His intentions and motives when it comes to her are sincere.  Then again, his past actions (killing Jeremy comes to mind) haven’t exactly earned him the benefit of the doubt.  Oh, these complex characters.

I shouldn’t be too hard on Elena though, for she learns what turning 18 is all about.  Alaric is leaving.  He doesn’t want to be the mentor or responsible guy anymore.  He’s got his own issues.  Elena is now the parent, the head of household, the one that has to hold everything together.  I love how they instantly show her doing this by not giving up on Stefan.

In a reversal of season one (there’s been a bit of that in this ep) while Damon starts trashing the place over his brother being too far gone and having to tell Elena the hard truth, one phone call from Stefan to Elena in a moment of weakness proves he isn’t.  Elena is the constant.  She tells Stefan she’s not giving up on him.  Remember, Elena is the one that eventually brought out the humanity in Damon too.  I’m so thrilled we’re back to just the love triangle.  Last season’s square was a bit too much.

Of course it doesn’t end there.  Twist of the week actually happens with Caroline.  Mrs. Lockwood has figured out she’s a vampire and shoots her with tranquilizers after she’s just had hot passionate sex with her son.  Talk about a mother not approving!

So what did we learn from “The Birthday”?  Damon is loving without being loved, Elena is pining for Stefan, Stefan is pining for Elena while struggling with who he is, Caroline and Tyler have the hots for each other, Jeremy and Alaric are struggling with issues in their lives, Matt is on the sideline watching all this with scowling discontent, and Bonnie is noticeably absent from all this.  In retrospect, nothing has changed.  Oh, but it has!  Don’t you love how these writers manage to stay the course yet keep us entertained while doing it?

Welcome back Vampire Diaries!  Did you love this episode as much as I did? 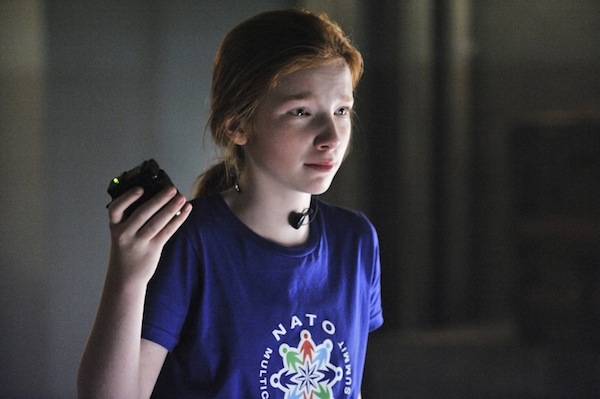 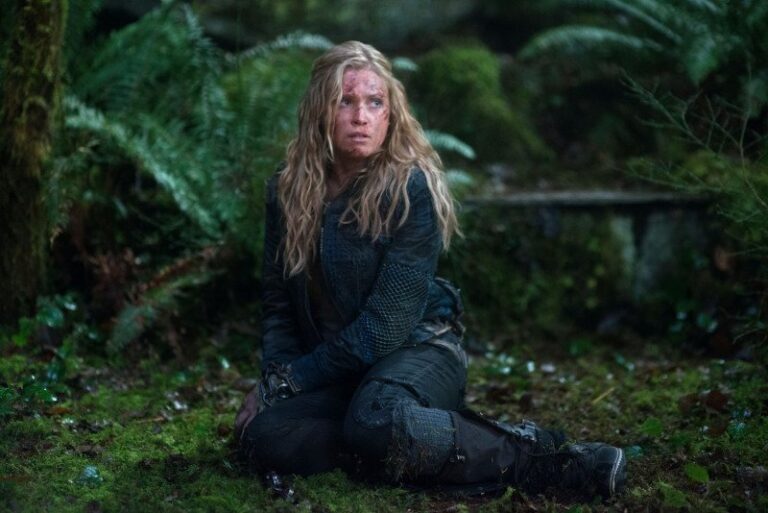 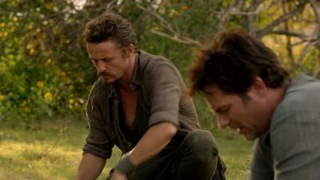 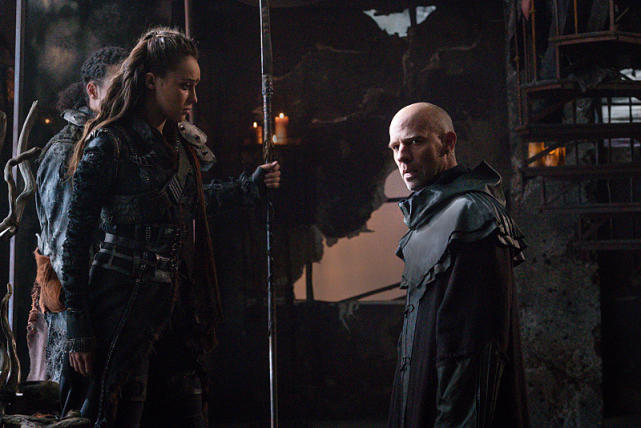